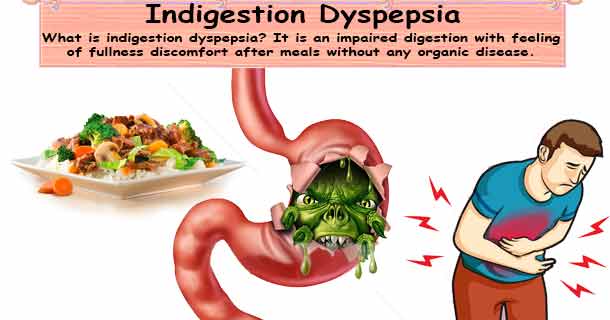 What is indigestion dyspepsia? It is an impaired digestion with feeling of fullness discomfort after meals without any organic disease.

What is indigestion or dyspepsia?

Indigestion is a condition of impaired digestion, which refers to a feeling of fullness or discomfort during or after a meal accompanied by burning or pain in the upper stomach. Indigestion is also known as dyspepsia.

Generally, dyspepsia effects in approximately one out of four adults. About one-half of them has classified as having functional dyspepsia.

Are you at risk for Indigestion?

Indigestion can affect all ages and of both sexes. It is extremely common; the risk towards it increases with excess alcohol consumption, use of certain drugs irritating stomach (eg. aspirin), digestive tract abnormality and emotional problems (anxiety or depression).

Functional dyspepsia is classifying into three categories; they are an ulcer like, dysmotility like, and idiopathic dyspepsia (unspecified).

What is functional dyspepsia?

Functional dyspepsia is characterizing by chronic or recurrent pain or discomfort, specifically in the upper abdomen. Unlike irritable bowel syndrome, symptoms are non-related to the defecation process. There is no confirmation of organic disease or structural or biochemical abnormality.